The Arte Bello gallery has been welcoming you for more than 20 years, in the Latin Quarter in Nouméa.

Jean Michon is one of the « South Pacific voyaging painters ».

A sailor without ship

Born in Brittany, he has been cradled by his great-uncles’ tales of former colonies where they had been posted, as well as by novelists like Gerbaud, Stevenson, Conrad, Loti. He received what he called a “puritanical Breton education.” After his studies in Paris during the German occupation, the Navy appeals to him strongly and he becomes a Merchant Navy officer. At the end of the war, however, ships are scarce and he finds himself a position at the Meteorological Office.

He longs for other horizons and at the age of 21 embarks aboard “Le Sagittaire”, bound for Australia with a hundred other migrants. After a hard trip in difficult conditions he is not allowed to disembark for lack of proper documents. He ends up un Noumea in March 1948, empty handed. He finds a job on “La Monique” which provides him enough to fulfill his dream and reach Tahiti.

When arriving in Bora Bora, he become a teacher only going to “the world” by coaster vessel every fortnight. Bathing in this environment Michon uses painting as a way to capture the sceneries of everyday life. Despite his very little training he pursues the experience as a game. From 1948, he realizes he has become an artist and devotes himself totally to his art. He exhibits in Papeete and gets to know painters of the time: Frank Faye, Masson, Boullaire.

17 years away from the Pacific

In 1952 and for health reasons he returns to France where he participates with Boullaire in an important exhibition of painters of the Pacific. From there, he travels to Cameroun and works for the African Forestry Department. His yearning for Polynesia remains strong though. Eventually he is posted in Wallis and happily returns to the Pacific region after a 17 years’ absence..

Working in Wallis, showing in Noumea

Jean “Soane) Michon eventually retires and after a two year stay in Noumea settles in Wallis for good. After 26 years without exhibition he shows wash-paintings, drawings and gouaches that meet with great success. From Wallis where he lives on a fale by the waterfront, Soane travels regularly to Noumea to exhibit his work always sought after. He is one of the first painters exhibiting in New Caledonia whose work had to be reproduced and copied to satisfy public demand..

When he comes back to the Pacific, he his nostalgic of the Oceanian world he had known in the years past and paints a world which no longer exists. He concentrates his art on Oceanian women, their generous figures and sensual postures, often nonchalant, with melancholic or maternal looks. It is a vision far from the very catholic Wallisian social context where woman have but little time and freedom, taken as they are by their family and customary duties. Michon however gives us to see the personal myth of femininity he carries deep down in him. This is for him a way to share with us his idyllic vision of the Pacific..

Acrylics, inks and pastels on paper or canvas are of his liking. Drawings and charcoals on recycled paper can also be found which, together with children’s drawings and advertisements, share in one of his work. Jean Soane Michon died in Wallis in 1998.

“Painting is my corner of paradise and helps me live.” 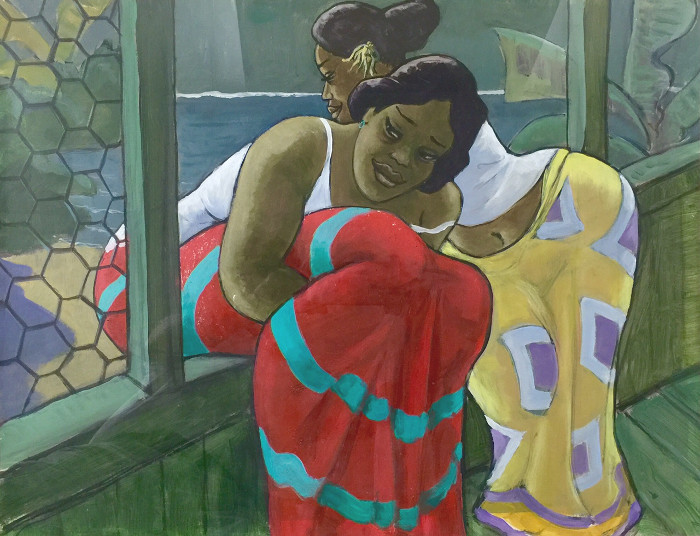 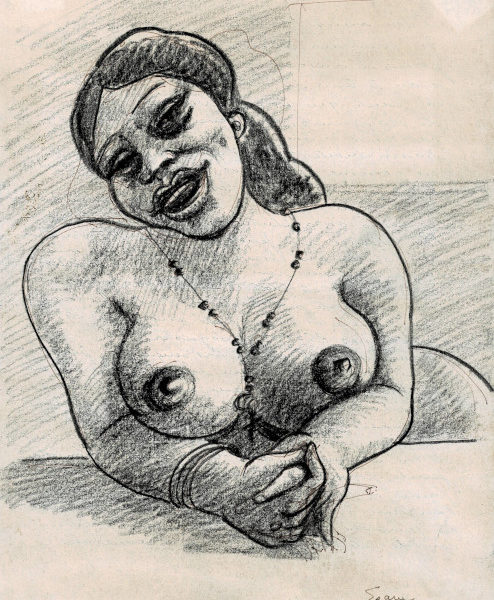 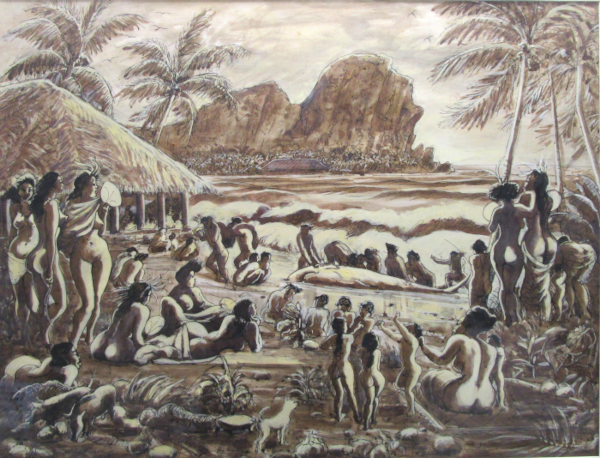 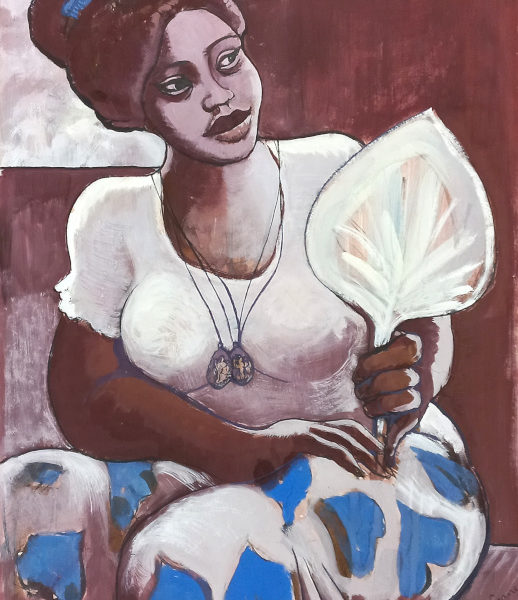 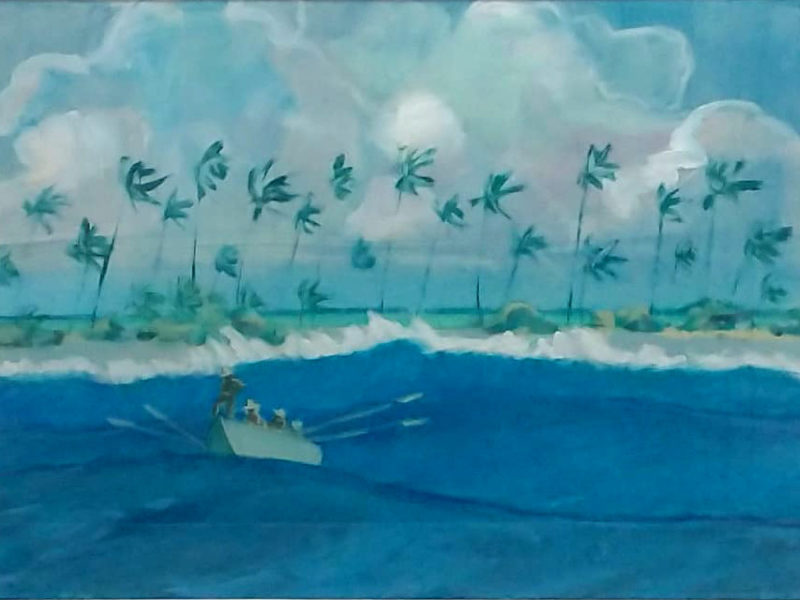 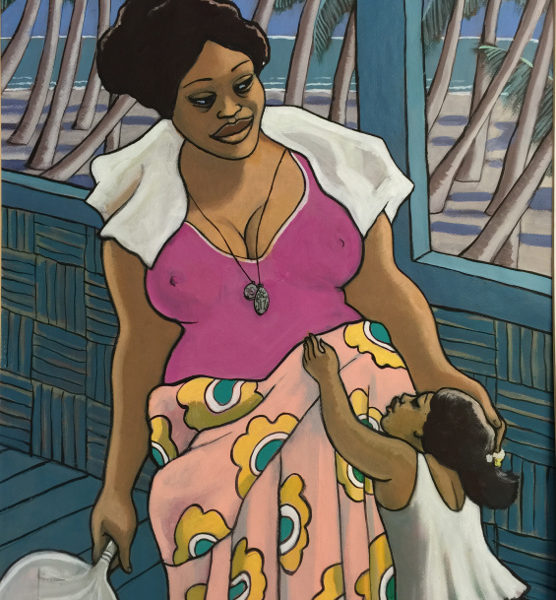 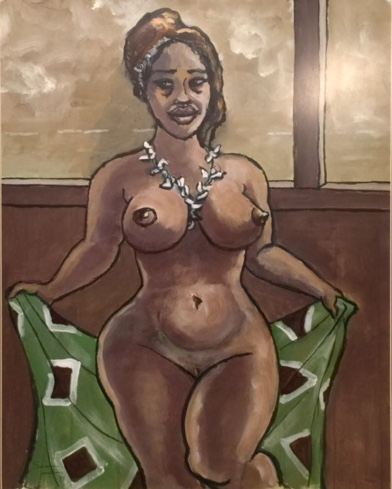 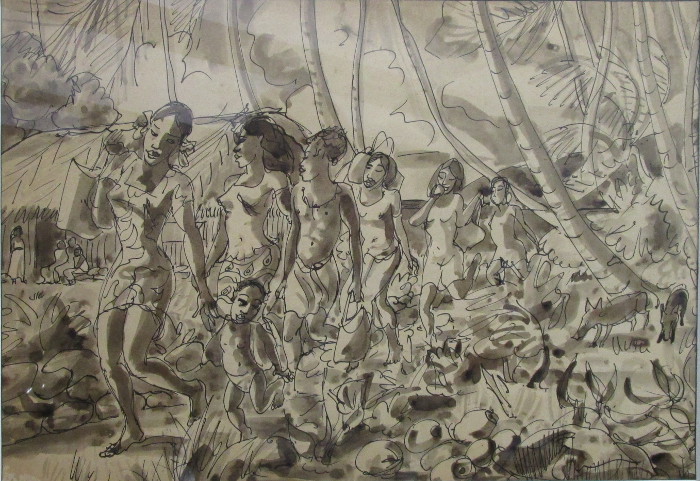